What a battle this weekend turned out to be... 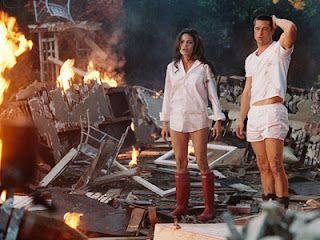 This was the one of the weirdest & hardest weekends I’ve ever had. I’ve NEVER done so much running around & without one moment to just sit down & breathe. I’m completely overwhelmed & exhausted out of my mind. The second I had a time to relax was about 2 hours ago when I got home. It has been non-stop since I got out of work on Friday. CJ & his friends ran me so ragged I’m desperate for a few moments alone to myself. CJ & I’s relationship somehow also lasted through this weekend of fights & brawls, none of which we’re our own. Yeah I’ll explain.
This weekend became a couples’ retreat type of weekend which I’ve been craving but not the fights. EVERYONE one of the couples we hung out with either had fights, broke up & got back together, compared me to CJ’s exes, or had those stare downs where they were pissed at each other. My head was spinning from it all because I honestly don’t know these people that well. Each of his couple friends have been dating for years & they are arguing about cheating, babies, weddings, living situations, & taking those next steps in life. I’ve listened to so much drama that all I wanted to do was go home & curl up into a ball & not be in a relationship. I’m sorry to say but 3 couples fighting right in front of me over the course of 60 hours had an effect on me.
It’s only been 4 months between CJ & I but I feel like we are moving way to fast. His biological clock is ticking for the other steps of his life as well as his friends. Mine isn’t. I just turned 25. I’m prepared to be in love, give myself to another person, maybe get engaged in a year, & get married and have kids in another 2 or 3. But for some reason people are shoving it down CJ & I’s throats questions about this stuff. ITS ONLY BEEN 4 MONTHS!!! His mom asked if I would consider a destination wedding. No, I don’t even want to think about it til at least a year of dating. One of his friend’s girlfriends was upset she wasn’t married yet & she is almost 30 & has been dating CJ’s friend for 4 years & flipped out.  She was watching a wedding show & lost it in front of us all. One of the other guys was lying that he didn’t cheat when he did. Another of them is upset cuz the boyfriend was so horrible to her & she won’t leave him for what reason I don’t know. It was a disaster.
I had fun at some of the stuff but then the drama sliced it all up. I miss my boyfriend. I saw him all weekend with all these drama cases & barely spent any alone time with him. It was too muddied by his friend’s relationships & then he had family stuff on Sunday where he played with the lil kids &  I had to go too so I barely saw my parents or have a moment to even do my make-up properly. It was too much. Way too much. I’m going to take off tomorrow of work because I need a chance to recuperate. I need to be me for a day, not a girlfriend. I will also talk to him about this tomorrow ASAP. This weekend was too much.
I did make 2 new friends in CJ’s friend’s girlfriends which rocked but I’lll talk about this tomorrow after I’ve had a chance to breathe. I feel like everything is in shambles. Sigh. New day…new start. Okay…see u tomorrow.
Posted by Melanie's Randomness at 12:24 AM

Sounds like you had an intense weekend. I've never gone on a couples' retreat, I've always wanted to, but now I am having second thoughts.

Ugh, I'm so sorry about the drama filled weekend. I hope your week is drama free!

holy drama! - i would of walked home or hitch hiked out of there! - i can not stand to be around people who fight all the time and my god the whole marriage thing - WAY TOO insane for me! - the girl who is upset that almost 30 n not married needs to possible have a lil more self confidence? .. your so right on, 4 months is NOT marriage or close to it! .. i'm so glad u have ur head on right and focused on right stuff! ... happy rejuvination today! - YOU DESERVE IT after that weekend!!!!

Chill for a bit, lovely. Don't listen to Cj's friends or girlfriends or parents. They have their own problems and they tend to let them run lose when they see people without problems like that.
Talk it over with CJ. Maybe he's not rushing anything.

i know exactly what you mean when you say that the drama of others relationships can take a toll. i went for a fun camping trip in july, it was suppose to be a chance to get away from everything. especially drama. and it turned into a couples scawble weekend. i got home and needed another vacation from that vacation. lol. a day to yourself always makes it better!

Sounds way too intense for me. Sorry it was that way. Enjoy your day off and get back to normal.

That is a good eye opener to see. Don't rush past the good parts things only get more complicated.

OMG...That sounds like a crazy weekend...I bet you are tired and had way too much of it all...Wow!!...I hope you will find a bit of time for yourself this week...and relax :) Sending kisses and hugs, darling

Wow that is a lot of stuff to go through. But I'm glad you're not like most girls and you want to take it nice and slow!

Oh Mel, that sucks that you got caught in the middle of all that. Take that mental health day and just chill. Talk to CJ, if he really cares he'll listen and understand. Hope it resolves itself. xx.

ahahaha. I'm sorry i think this is funny, but I have no life and I quite like drama. Sorry girl you had such a crappy time.

I hope everything turns up roses! Your deserve the best and remember that the only thing that matters is your happiness! Don't let anyone take that away from you!

I can relate, I'm feeling that from my family right now too. Keep your head up!

That definitely sounds like too much drama for a weekend. Sorry everyone's being so pressuring. I'm sure everything will happen in its own time :)