I can’t believe it’s been 4 months… 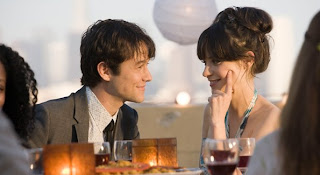 “The greatest thing you'll ever learn is just to love and be loved in return.”
– Toulouse-Lautrec, Moulin Rouge
I have a confession to make. I don’t think I’ve ever truly had a successful relationship. I would find out that it wasn’t going to work out early on like when an ex of mine called me the wrong name at an inopportune time, or when another ex was spending more time with my roommate than me, or when I realized another stopped calling but then I called him from a blocked number to be like yo what the hell is up? BUT for some stupid reason I’d have get this sick twisted notion that it might work out, that something might change, or whatever guy it was would realize we fit together. All of them failed. Till now…

CJ & I have been together now for 4 months. I believed him when he said he came back into the bar we met at because he was hoping he’d see me again. I even went to the bar he went to after he asked me out to make sure I wasn’t dreaming & he had in fact asked me out to dinner. I’ve even had a surgery during the relationship & he still wanted to be with me. He’s the first guy to ever truly tell me he loved me. He’s the first guy that has actually made me feel like I have a true boyfriend who wants to be with me. It’s…this has all never happened before. First guy who’s wanted to show me the world…I am so happy it has happened. All of it.
He wanted to know if I thought there was potential for us to be long-term when I said I would date him. I was scared at first because this is my first true experience with a real love that was returned. I said yes. I actually think there might possibly be a potential here for something greater. I’m so not getting ahead of myself I want to take things slow even tho people are pushing me for information that I couldn’t possible give, but I can see this going far.

So this is what love is? Endless nights of talking, laughing, sharing our stories…snuggling together to keep each other warm, taking each other’s hand & giving it an extra squeeze just so they know you’re happy to be with them, playing video games til the wee hours of the morning, making each other breakfast, & making each other smile…if it is love then I’m in love. But more importantly, I'm happy. That I think is worth its weight in gold.
4 months. It seems like longer.  There will be some changes in our schedules because he will have class & I will have my cake decorating class & the winter will bring snow & it might be harder for us to make time for one another. I’m up for the challenge. I hope it works. I’m keeping my fingers crossed! =)
What is your definition of love? I’d love to hear…
Posted by Melanie's Randomness at 11:06 PM

Congratulations. Love is kind of awesome, isn't it?

For me, love is knowing that there's this dude that I can count as my BFF and let's me snuggle him like crazy and doesn't complain when I steal all the blankets and can make me laugh even when I'm blubbering and calmly hoses the driveway off after I vomit on it (on our first date, too!). He'd do anything for my parents and grandma and actually lived with my sister and brother-in-law for a while, so I know my family loves him which is just icing on the cake.

Love is what you want it to be, and it sounds like you've got that! Congrats on the four months!!!!

You and CJ are so cute together it KILLS me!! :P

I love that photo of you both. And I'm so happy you finally found a man who loves you and treats you with respect. You've had to kiss a lot of frogs to find the prince it seems and I know it's been worth it for you. I think it gives you a deeper appreciation for real love.

And I would freaking LOVE for you to guest post for me. :) If you have time, of course. Do you have my e-mail? Basically just send me your text and photo(s) whenever you feel like it and I'll let you know when it will be published. I'm keeping this casual and there is no deadline! I hope you will consider...

So sweet! Love is never hurting the one you love and always making sure they are happy.

i love that quote from Moulin Rouge. i live by that quote.
it's so glad to hear you are filled with love..i define love as accepting each other through your ups and downs. :)

I'm so happy for you hun. He seems like a sweetheart. Best wishes for you both. xx

I'm happy that you have found someone that you truely care about and who in returns cares for you as well. Best of luck!

SUPER happy for you! Congrats!!!

aweee - i think the best way to explain "love" - is someone else's imperfections are your perfections of them - that's hard to come by!

aww this is such a sweet post. I dont think ive been in love. Like you i have yet to be in a working relationship. In terms of what i think love is... i think its the acceptance and enjoyment of another person exactly the way they are. no changes need to be made, the good, the bad and the ugly is all adored. i wish you luck :)

aww you are sweet. Thanks for your insightful comment by the way.

congrats! Not sure what my definition of love is, every relationship has been slightly different. and that is great that you are so happy, as that is the most important :)

Ya'll are too cute! Trust was a huge issue for me and when I realized that I could trust him with my heart, I knew it was the forever kind of love!

It sounds like you are in such a great place!

To me love is being with someone that you can be completely yourself with and they love every little quirk you have.

Congratulations for finding a good guy!

I really wish I know what love is

congrats! This is a huge deal, having someone to love who loves you back and actually feeling happy in your relationship and life is so important! I'm glad you've finally found a great guy, you deserve it! I don't have a definition of love, though I hope to one day. Right now no one has ever returned my romantic advances in the first place, so asking for love too seems like a bit much.

That's so sweet! Congrats on 4 months. My brother in law went back to the same place he met my sister at because he was hoping to run into her again. He really lost her number and was desperate to find her. Fast forward 12 years and they're still together. I hope the same for u :)

you two are so cute! and thank you for such an honest post...

relationships are a tricky thing huh? i have had my fair share of heartache but i think love is someone who is your best friend. who makes you laugh and who brings out the better version of you without asking you to change.

Congrats love. So happy for you! I can say- that after almost 6 years with my boyfriend- celebrating milestones like month anniversary's is a great thing. You are an amazing person and he is lucky to have you!!!

The Kid In The Front Row said...

love is pain multipled by 50 .

This is so sweet! Congrats on the 4 months!

right on! you are in the thick of it! there is nothing better than being in love!!!!

Aw congrats! I am so happy for you :) I remember reading your post back when you met him and it seems like it just just seems to be getting better.

Here's to many more months :)

Aaahh so sweet! Isn't being happy such a wonderful feeling? All the best for many more months of talking, laughing, sharing, smiling and being loved!

I'm glad everything is going well for you guys. Wish you all the best :)

Congrats!! It's so sweet. Enjoy the ride.

Aww, so sweet :) Im glad you have a guy for keeps now! You had to get through those hard times to realize how special your guy is. Good for you!

i'm happy for you! this is very exciting and something to be celebrated and cherished.
for me, love is about forgiveness. it's not easy, but it will get you though a multitude of experiences.

I love that pic of you! So cute and so happy :)

how how beautiful!! congratulations!!! I really couldnt say, I have felt that before and been on long term relationships, even got married once and had a baby but now I am happily divorced and living with my so in a house I lovingly bought and decorated for the two of us... I am starting over. I think it's a really good sign when by the fourth month, you feel that way about him, you really seem to make a great couple!!!! thanks for visiting my blog!!! xoxoxo

oh my that is so incredibly beautiful, you are so lucky to have such a wonderful guy, look after this guy and yourself. if you ever start to have a normal relationship moment of getting a little cranky with him, think back to this post.
i hope everything goes incredibly well for you. love is what keeps the worlds heart beating.

ahhh i love this story. it really does sound like you've met a good one here - he's putting you first. the first few days, weeks, months are so important because if bad things crop up early on, it's never going to get any better. i wish you all the best... i don't know you too well, but i have a good feeling xx

Wow, congratulations! I am so happy for you! :)

Have faith in your partner and that he will be there for you. Ive been with my guy for 13 yrs and it wasnt an easy road...but now we put our relationship and faith in God to keep us together and with a strong bond.

4 months is a very short time together, but that just means you have so much to look forward to. :))))