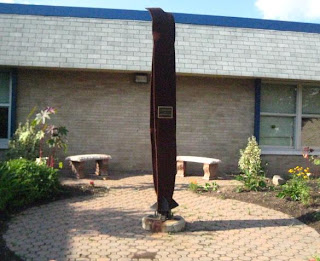 We will never forget. This is a photo I took of one of the beams at the Franklin Ave Elementary School. In Pearl River, NY every school has a beam. My high school has 2 beams. The next town over has 1 beam in a courtyard in the center of town.

I remember on September 11th being in gym class around 8:40am. I'll never forget one of the other students saying to me that plane looks a lil low...and we heard the noise of a plane overhead. It might have been one of the planes. I looked up and it was eerie, reallly eerie. I finished the soccer game, ran to change back into my clothes, and then ran to Mr. Licht's class. I mean ran, because I was late. I ran up the 3 stories of stairs from the gym to the Math Wing all out of breath and when I entered the classrom everyone was sitting and Mr. Licht saw me and said Oh good now everyone is here. I sat down out of breath & Mr. Licht said, "Just to let all of you know there was a terrorist attack on the World Trade Centers a few minutes ago." I let out the breath I didn't know I was holding. We finished class for 42 minutes and then I went to Latin. There I found out that the buildings collapsed. Mrs. Probst was on the phone with her husband and she said it out loud for us all to here. My high school is about 20 minutes from the George Washington bridge just outside Manhatten, so we were in a lock down. My memory is fuzzy of the exact moments but I remember falling out of my chair at some point or I missed the chair of those horrific desks that have the chair glued to it. No one noticed. When I left Latin I thought the world had gone nuts. I heard that the Sears tower had been hit that there were planes at the Pentagon and soo much other stuff. A friend's father worked in the building but for some reason he didn't go to work that day.

Next thing I know I was walking to the main office to call my mom but my mom was already there. It was like she just appeared out of no where. I didn't have a cell phone back then so it literally was her appearing from behind the line of buses. I remember running to her because she got let out of her job and they told her to get your kids and go sit in your basement. We went home and watched it on the TV for days. I don't think I'll ever see people walk out of Manhatten so calmly again in my entire life. I think I watched Spongebob Squarepants on Nickelodeon because it was the only TV channel that was still broadcasting other things.

What boggles my mind is the people that for some reason didn't go to work that day. My friend's dad didn't go in. Some people were stuck in traffic. Some people were sick that day. Others just didn't go to work. I luckily didn't have any family that was killed or injured but I know of soldiers that from my high school and friends that have served to fight against terrorism. It's just...Our whole world changed that day.

I've been to Ground Zero and it's just...there are no words to describe. On the road I used to go my college on you used to be able to see the towers of light they did in memoriam. I remember when i was a cheerleader and we had away games in Westchester county you could look out from the Tappan Zee Bridge and see New York City. It's the eeriest & sadest thing in the world to not see the Twin Towers because I always tried to look and see them whenever we by. I was going to go have lunch on top of them for my 16th birthday but I got sick and me and my parents didn't go.

All I can think about is that scene in the movie Signs where the lil boy says, "All the history books are going to change".

I remember asking my parents where they were when Kennedy was shot years ago when I studied it. My mom was in sewing class & hmm can't remember where my dad was and When my future child one day asks me where I was when the World Trade Centers went down Ill tell them the above answer and give them a hug shortly after.

Where were you? What will you tell your children when they ask?

Blessings to all the families and lives that the day irrevocably changed. We will never forget. R.I.P. I hope one day the war on terrorism will end. I hope. 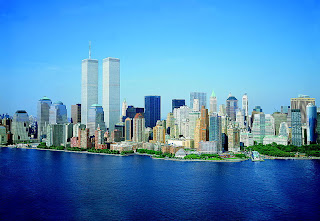 Posted by Melanie's Randomness at 3:51 PM

I wasn't in NY at the time, but it was still just as scary to be in 5th grade and think those types of things wouldn't ever happen to us.

Over here in the UK, it was afternoon. I remember hearing it on the radio in my mum's car coming home from school. Then I sat and watched it on tv for hours. Tears streaming down my face. I don't know anyone who was there, I've never been to New York, but the sheer horror of it all shook me.
It didn't seem real, more like a scene from one of those disaster movies. xx.

Thank you for sharing your story. I think that helps in the healing. I was at work near the Empire State Building and walked home with my BFF. The full story is on today's post...it just doesn't seem like 9 years can have already gone by.

That is a good question of what I will tell my child...the truth...my story...I will show them the newspapers I have and hug them.

I will never forget where I was and what I did, too!

awesome post luv. I'll never forget where I was when I heard the news. I worked in commercial property management at the time and my office was in one of the big bank's towers. I remember looking back on the Toronto skyline as I was going home and realized that the complex I worked in is kinda T.O.'s twin towers, altho there are several. It was a little eerie.
It was just so surreal. We had the big screens on in the office and when the first plane hit it was "pilot or mechanical problem". With the second ... we knew that was no coincidence.
I can't believe next year will mark a decade. Even as a Canadian, the events of that day had a profound and lasting effect. Let's hope it's a once in a lifetime occurence.

I was in 6th grade when it happened, and my mom's friend actually picked me up from school early as soon as it happened but I didn't find out why until I got home. I remember watching the news in shock.

I was at my dad's office at work. We watched the news channel on his little TV. It was all so surreal.

What a beautiful tribute! And it is so true...we will never forget!

I had no idea about these beams...what an amazing tribute! I grew up in Rockland County...its still very near and dear to my heart. Beautiful post.

I was living in Boston, and the city was in panic because the planes had come from Logan Airport, and they didn't know if there would be attacks in Boston. I just remember being so scared and wanting to go home to the countryside of upstate ny

Thank you for sharing your story. I know it's hard for people to do, definitely if they lived in NY at the time or was directly affected by it.
I was in 3rd grade when it happened. Mother told me what had happened, and all I remember was not understanding it because why would anyone kill themselves like that or anyone else.
=/

i found out I was carrying a new living being... while so many people were dying...