One of the Best Concerts Ever with a few Suprising Twists.... 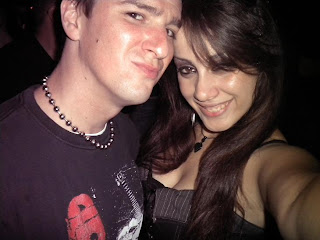 That’s me & CJ all ready for The Birthday Massacre concert. Everyone has that one obscure band that that they totally love! This one is mine! It was probably one of the best live concerts I’ve ever gone too & I think the company I went with had something to add to it too. This is the first concert I’ve ever went with a boyfriend, who actually danced with me, rocked with me, & got all dressed up too!! Cj came with bells on. He was all ready to party & he drove us in. I couldn’t have asked for a better time. The venue was small so I was right up there watching them right in front! =) Ohhh where to begin? 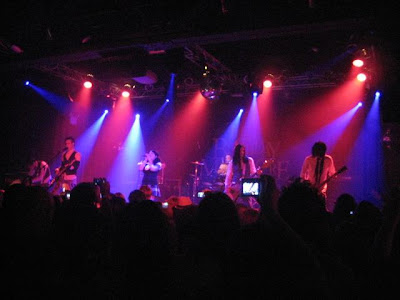 They are one of those bands who sound exactly like their cds when they sing live. My fan girl fanatics started the second they came on! My lil goth rock girl came out! They played songs from all their albums, including their new album, “Pins & Needles” that omg is a great song. It’s so hard to get pictures of them in concert because they are moving around so much! But that’s so cool because you can almost feel the energy from them! It’s awesome!! See they’re lyrics are basically everything I’ve ever wanted to say in relationships & break-ups & I just couldn’t find the right words. But the BEST part of about it ALL was that they totally REMEMBERED ME!!!

I was in their music video about 3 years ago and when they came out to sign autographs they ALL remembered me. The drummer, Rhim, before I even said anything was like "I know you! How do I know you! I see tons of faces but yours sticks out, I know I know you." It brought such a smile to my face I can’t begin to describe. I told him the video is how he knew me & he was like "Yes!! That’s it!!" Hehe. I got to talk to them all & they told me thank you for still being a fan for all these years. I was beyond thrilled. I got pictures with all the members except the lead singer Chibi but she was hounded by tons of fan kids. I did get her autograph tho! It was such a fun night & having CJ with me made it a 100 times better!! =)

Here are the pictures from the night: 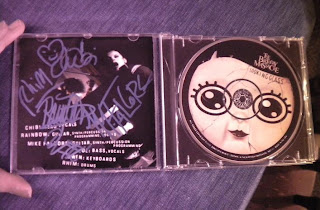 I got all their autographs on the CD Pamphlet from the music video I was in! Oh yeah my name is in that CD Pamphlet too! 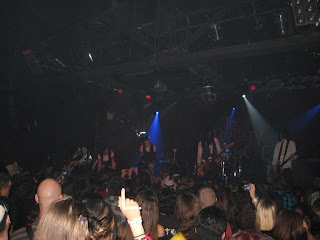 It was so dark in the venue!! But they rocked it!! 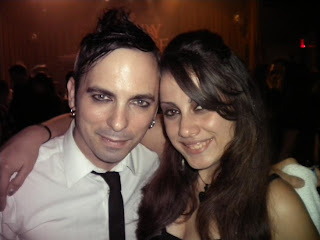 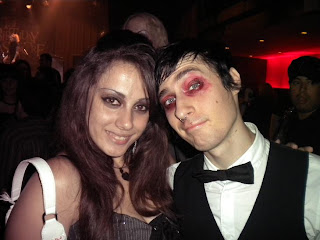 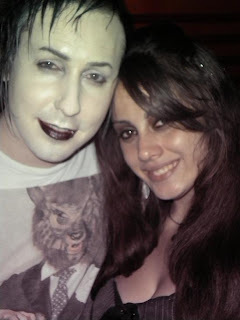 One of the lead guitarist, Rainbow! He looks like Marilyn Mason lol! 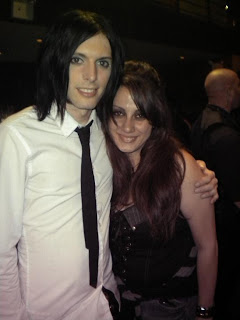 Falcore the lead guitarist & me!
One thing I absolutely love is going to see my favorite bands in concert! I'm lucky that I’m near NYC where a lot of my favorite bands perform! It was a great night & Oh yes there was a HUGE TWIST to the night...

Remember that my ex the Mess told me about the concert...well he was there...AND I did talk to him...

To be continued tomorrow...
Posted by Melanie's Randomness at 11:11 PM

Email ThisBlogThis!Share to TwitterShare to FacebookShare to Pinterest
Labels: Events

oh my gosh! can't wait to hear how it all went. I bet you were awesomely confident and fierce! :)

Wow, that is really cool you had a such a great time & they all remembered you! :)

No way?
You talked to him?...OMG you have to write all about it..I cant wait:)
Is so cool that the band remembered you and how amazing that you got all those photos with them:)...Well done,sweetie
So happy for you:)
Happy Monday

I love the Birthday Massacre!!!
Fantastic shots Mel, I always love to go to concerts, whenever possible...

Thanks for your kind words my dear on my pics....

What a great time! Glad you had so much fun. Can't wait to hear about the run in with the ex.

how fun! glad you had such a super time!

and of course i am curious to hear their music! must check them out!!!

Such a fun time! You look fantastic!

So cool that the band remembered you from their video...and so cool that you were in the video! I can't imagine how much fun that must have been!

Sounds like such a great time! Nothing beats amazing live music! Except having the band actually remember you personally of course! :)

What fun time, gorgeous! You talked to your ex?! Oh can't wait for that story! Kisses to you love

I'm glad you had a great time...and I'm going to read the continued part about the mess RIGHT NOW!!

I had never heard of them but I went to their myspace page and they sound really good! Glad u had a good time!