I can't cook, therefore I go to Demos...Returns. 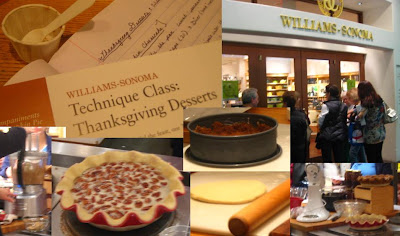 Due to all the complications in the past month or so I haven't been to any of my favorite Sunday past-times. The Williams Sonoma Demos. I used to go to the Williams Sonoma demos, drink my bottle of Cocoa Cola, & learn about certain cooking techniques every Sunday. I have missed it so much. Above is a collage of parts of the demo made by me.

This week was about Thanksgiving desserts. Now for people in the U.S. it's pretty standard that Thanksgiving screams Pie. The pumpkin pie, the apple pie, & the pecan pie. Well this class took a bit of a spin on these classics. I saw how a Pumpkin Cheesecake was made. At first I was like Pumpkin Cheesecake?!?!?! That sounds Omg yummy & indeed at the tasting during the end I was begging for another piece. It's completely different than a pumpkin pie but it tastes just as creamy & just as delicious. The key twist of the taste of this cheesecake is the crust. It's not your usual graham cracker crust, but a Ginger Snap Cookie crust around the filling. This Ginger Snap Cookie crust can be used instead of any Graham Cracker crust.

If you are interested in this Pumpkin Cheesecake this link is the recipe on Williams Sonoma's website. 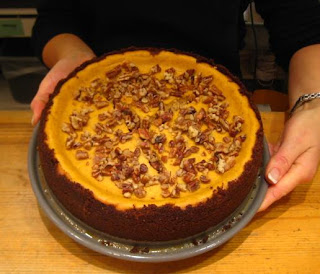 This is what it looks like. The kind demo lady was nice enough to hold it out for me so I could take a picture. Along with the Pumpkin cheescake, we learned how to add some decorations to the old-time classic Pumpkin Pie. She used a leaf punch to cut out leaves in the pie crust dough to place them on top of the edges of the pie crust within the grooves of the pan. It really looked beautiful in person.

Here is the picture of the Leaf pie crust Pumpkin Pie. Of course click to enlarge. 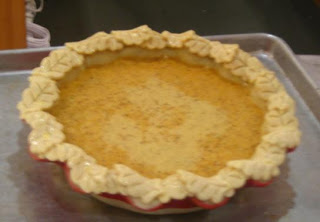 This class was one of the more fun ones I've attended. I really recommend going to these FREE demos because you do learn a lot. Also, it's one thing to see all the lil gadgets in the stores but it's another thing to actually see them used. Williams Sonoma is a bit expensive on things in my opinion but you'll have them for a very long time & it will make your life a lil easier in the kitchen.

Along with the pies my mom & I learned a few Tips about pie crust & cooking that I wanted to share as well:

1.) Always used Unsalted COLD Butter when making a pie crust. This is because you are already adding salt to the recipe, so you don't want to over salt it by using salty butter. The moisture of the a pie crust dough does matter & salty butter is too moist.

2.) When placing a pie crust in a pan, grease your non-stick pan with butter instead of cooking spray. The cooking spray will eventually discolor your pie pan because of the aerosol.

3.) Always crack open eggs in a separate container, individually, so you don't get egg shells in your recipe.

4.) A Marble surface is a good place to roll out dough. It doesn't stick to it as much as granite or others so you don't have to use that much flour on it.

5.) It helps to chill pie crust dough in a round disk in plastic wrap for at least 20 minutes before rolling it out. The dough being chilled helps keep the dough together when rolling it fully out. 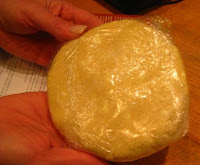 Just as a side note, Williams Sonoma does sell pumpkin pie mixes, pecan pie mixes, and a lot of pre-made mixes for holiday cooking just in case your in a rush.

It's nice to get back to my normal routine. I'm trying very hard to see past things, let go, get some new hobbies, & just feel better. It's slow but I'm trying to make it work lil by lil each day. One day I'll know how to cook too. hehe. These cooking demos are free so if you live near a Williams Sonoma, check em out. The tastings are uber yummy too.

Good luck everyone with your weeks!! Til Tomorrow...
Posted by Melanie's Randomness at 11:11 PM

Email ThisBlogThis!Share to TwitterShare to FacebookShare to Pinterest
Labels: cooking

William Sonoma. *drools* I have tea cups and saucers from there, and I covet the whole store.

Awesome tips and yummy looking pie! I've just put a tag/award up on my blog and I'd really like you to have it! xx

Hey Melanie, instead of reading your blog I think I'm just going to eat it. Those pics look just too yummy.

I think it's so great that you're making a conscious effort to move past those things that are holding you back and dragging you down. You're a great person and deserve much more, my dear.

Oh, and thanks for your comments on Sandy's blog. They were very sweet. :)

I have a Williams Sonoma right near my house but I never think to go to their demos, sounds like fun!

That leaf crust is adorable. You're such a fancy chef!

Now I'm hungry. I'm checking out the pumpkin cheesecake recipe. My aunt used to make one. So yummy!

Wow does that sound good. I love just about any kind of cheesecake.

Hearing all you guys say how yummy these sound is making me soo hungry for Thanksgiving. Omg. <3

The pumpkin cheesecake scares me bad, I might eat it all!

Omg. I literally just ate lunch but when I saw these photos, I just got hungry AGAIN. Lol. Pumpkin cheesecake sounds so freaking yummy. And it looks delicious...I think I might faint. Thanks for the pie tips. :)

LOLOLOL i want one! But i think id probbaly have keys missing ahah xD

dude. i have been wanting to take one of these classes. bah. i need to do it. but not the pumpkin pie class. BARF. the thought of pumpkin pie makes me want to hurl. that color! that taste! ugh! wait. maybe that means i should go to that class, as i would want to snarf down any other flavor of pie.

hope you are doing a bit better. i know it is a hell of a struggle, but i also know it will get a little easier with time. at least that is what i keep telling myself!

oo fun! I should check this out

just found your blog. i love it, totally understand the lost feeling too. cannot wait to read more! would you like to trade links?

Thanks for your thoughtful comment love, we can cheer each other up when we are both blue, k? I love your cooking tips and all of those pies look sooo yummy, I want to start cooking for Thanksgiving! XO!

anything cheesecake is delicious!!!!

That cheesecake looks so good!

Pumpkin cheesecake sounds great to me from the very start! (Like love at first sight! ;O))It must be a delicious mix... thank you for that tips! the few times I tried to prepare something sweet I really messed everything up and the result was not really good! he he he heeeeeee But may give it a try again one of these days

That looks like so much fun! I'd love to go to a cooking demo , and i need to since I can barely cook anything :)

i've never eaten that, it looks so delicious!!!!