Wouldn't you miss her? 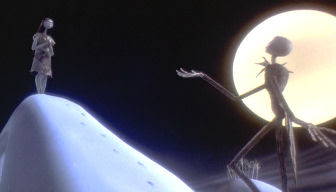 In that adorable last scene of the movie, "Nightmare before Christmas" Jack Skellington goes and finds Sally because he wanted to be with her. I love that last scene.

I was sitting tonight watching a movie & reading a book (I multi-task alot) & thought of a conversation I had a few months ago with someone but geez it feels like years ago now. The convo began after a summer concert I went to with someone. He turned to me and was like, "Yeah know dude we go do things that people never get a chance to go do. It's unbelievable that we've actually pulled it off. I wonder what we'll do next?" What he was referring to are those events & things people always say they want to do but never get around to doing it. For example, seeing your favorite band in concert, going to see where that scene in the movie was actually filmed, getting autographs & pictures taken with your favorite celebrities, eat at a Sonic, going to events that maybe 2 states away & at least a thousand miles....him & I used to go do those things on each other's list.

I guess not...You can't change how people think. You can't magically make him go find you on top that snowy mountain like in the movie. I wonder tho when the new person takes a photo where you only have one chance & it sucks if you'll say to yourself, "Melanie always took the best photos." Or will it just be a new memory to erase the old one of me?

Who knows...I won't forget...but that's just me. I rarely forget things. I like my memories & I hold them dear, even if looking back on them there were only a few moments of real happiness, I'll still remember them when others will forget.

I thought I would be missed...But without a response of "I miss you too" it's too hard to tell. What a shitty turn of events. If I was in the reverse position & I used to go do all these things with a certain girl, I'd miss her.

I miss the guy I used to go do all those cool things with & who would put his head on top on mine while I was pretending to take a nap on his shoulder on the train ride home...even if he doesn't miss me.

A pineapple is neither an apple or a pine. It is, in fact, a large berry.
Hey ya never know it might be a Jeporady question one day. lol.
Posted by Melanie's Randomness at 11:35 PM

If he doesn't realize what he had, you're much better off lady!

Oh, honey...I can't make any judgments about him, but I *know* he is missing out, whether he admits it or not. I have a great memory for all the little things, too. They're what I miss the most. And I've done my share of missing.

In my experience, the old cliche is true. Good things come to those who wait. I think you just haven't met your Jack yet.

I'm keeping you and your situation in my thoughts and prayers. Mwah!

Melanie, Hold on to your memories! :o)
It is so weird that you have written this post, 'cause I just got an email from an old and very close friend...once... We drifted apart after he bought a house with his girlfriends and had two girls.
We always hung out when we were living at the same dorm and we knew everything about eachother.. I like his girlfriend: she's the best thing that ever happened to him and it's thanks to her that I was introduced to the music of Norah Jones.
But he misses our conversations, laughs, long runs and walks where we talked about our latest boyfriend/girlfriend, movies etc. Cant wait to have a cup coffee with him on Tuesday and catch up on everything.....

Melanie, cheer up... you are missed but guys are like that, they're not as emotional as us girls. The most important thing in your agenda now is to hope and be positive about tomorrow. It's Mr Platform's day.

It's a mystery when people drop out of our lives like that. Makes us wonder about them forever.

Sorry to say this, but I believe is male nature, they don't live things as "deep" and as "emotionally" as we do. They are much less complex creatures than us that separate memories in two categories: good and bad memories... and I am sure you are in the "good" group ;O), just don't expect too much analysis from a man! :OP

I love the nightmare before christmas!!

i am kinda incapable of being the kinda guy who anyone would wanna be with in a relationship. and more over i am scared of rejection, so i dont try, im not even in the game. but when i read stuff like this, i wonder how miserable it feels? and that it must had been something when it was around. get well, hope you feel better enough soon. happy holidays, merry christmas and happy new year.

I think this is supposed to be an easy question and yet it is a hard one to answer. Leads me to think about twisted layers of she loves, he loves, she sees, he sees. The couple that truly have it all and sustain it, is rare.

You'll find someone else to do those things with. I promise. Happy reading!

Melanie, I have an award for you. Check out my blog please.

Bonjour Melanie!
You said 'you'll still remember them when others forget' - only a special person thinks like that, and therefore you will find a special guy just for you! Honest!
I waited forever (at least it felt like forever) before I met my honey, and it was like a lightning bolt - really, we still can't believe it. Wait for the RIGHT one!
Thank you for stopping by my blog, it it much appreciated. Hope you are ready for Christmas. Have a fabulous Sunday.

Ohh cheer up dear ! I bet you'll find another man who's better than him :)

Hey there. I hope you're having a good weekend. It's been cold and rainy here. Our internet keeps going out so I did want to leave a comment on your blog. Take care. Have a great week. Cheers!

that's really unfortunate, but as much as you miss him (and we cannot help but miss people we love, even if they mistreat us) you will find someone else eventually who appreciates you and doesn't forget to call

oy! love is a funny thing...but then i guess it's not. haha. not much help here.

If he doesn't miss you, then I'm pretty sure he has no heart. Seriously. You can't just be close to someone one day and then magically the next day have them erased from your heart. It doesn't work that way. It takes time to let someone go. You two had a past together, you did so many fun, wonderful things together. He has to miss you. I think he's just being an ass and not letting his feelings show. :(
You deserve someone infinitely better. Someone who treats you like a princess and who can't wait to see you and have adventures with you. When you find that person, no matter how long it takes (hopefully not TOO long, lol) you know it will have been worth it.

You will find the right guy for you love! I hope you find someone like Jack is to Sally. Someone who loves you for you and that treats you really special. :)

I think he does miss you. I think he probably thinks about you just as much if not more than you think about him. Men suck at communicating. End of story. He'll never tell you. He'll never want to be vulnerable. You deserve someone that will go to that snowy mountain for you! You may have loved the reflection of yourself you saw in him...maybe that wasn't really him. You were too damn cool for school for this little boy my dear. He played along...but couldn't keep up.