Where were they going without ever knowing the way... 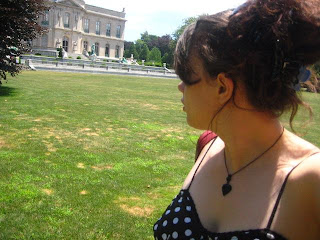 It feels so good to be home again I can’t begin to tell you. This weekend I went to Rhode Island with a friend & yes there were some fun times but I’ve never been so tired & drained from the ridiculousness that occurred. I went with the friend I was supposed to go to Las Vegas with & apparently she has become the rudest girl on the planet. I’ve been her friend for almost 14 years & she’s a complete bitch to me. I stayed away from her til we had to leave. She even told me that if there was a zombie attack she would push me in front of the zombie then run so she could survive. Wtf? This is the girl that I’ve helped more times than I can count. I drove her to the hospital when she was sick, stayed with her when her parents were away, been there for her…but she’s a druggy bitch. Unfortunately I didn’t have the greatest weekend. However I did get to eat some clams & oysters!! =) 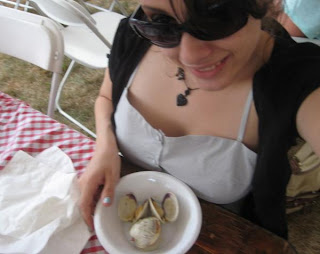 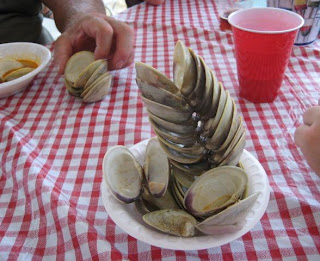 BUT there were some highlights. I did get to go back to New Port, Rhode Island to see more of the gorgeous mansions there. I got to go to the Elms & the Marble House. It’s funny how amazing they are inside. There are rooms with solid gold trimmings on the walls. You look up at the ceiling and there are paintings in the ceiling. There are lil scallops for door handles. The dressing tables, the tapestries, the artwork on the walls. It takes my breath away. I couldn’t take any pictures inside but here are some from the outside! 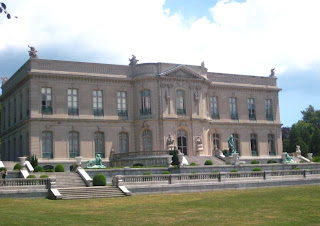 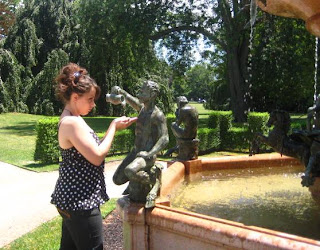 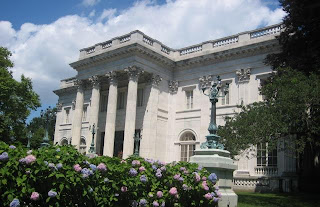 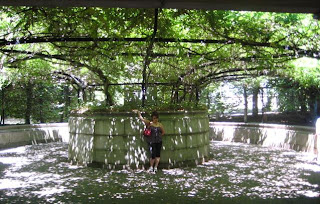 I’m so happy to be home. I like Rhode Island but I’m such a New Yorker. However the sky at night up there is so gorgeous because there was no cities near where I was so I got to see all the stars. I even got to see a few shooting stars. It almost seemed magical. I spent most of Saturday night by myself because I was avoiding the friend but I fell into my own lil world where any dream seemed possible. The feeling past & I went back to reality though.

My reality is a lil haphazard at the moment. I made a decision to give CJ a chance & now I’m on the brink of making another huge decision that will change my life entirely. This decision might be the driving force I need to get myself a new job because I’ll need the money to do it. It’s an opportunity that doesn’t come along very often…I’m almost 25 & I’m feeling it because the choices I’m making are big ones that will affect me as well as my family. I can’t afford to be battered by crappy friends anymore & be downgraded because I wasn’t born with a silver spoon in my mouth either. Things are going to change & they will be for the better.

I made a wish on that shooting star…I hope it comes true. Til Tomorrow… 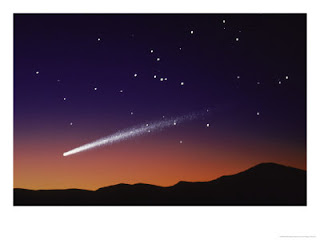 Posted by Melanie's Randomness at 11:30 PM

It's really true: There's no place like home :)
oxoxo
Denalee

I do like traveling and going to different places, but I always enjoy coming home more. Im sorry you had such a disappointment in your long time friend... I love the song your title references btw! love it!

P.S. those oysters look good. I think they would be really yummy if they were baked oysters with butter and cheese. yum!

I wish you could have snapped some pictures of the inside of the Elms & Marble House. It sounds so interesting. And about your "friend" hmmmm... I can't help but raise an eyebrow about the zombie thing she said. tsk tsk.
Anyway, I hope your wish comes true. =)

STOP hanging around with that "friend". Just because you've known eachother for 14 years, doesn't mean you have to continue knowing eachother. She is obviously not a friend to you even though you've been a friend to her. Sometimes you just need to sever the ties!

My goodness!! I can't believe she said that to you!!! It's sad when you help others so much and for so long and you aren't appreciated for it at all. I have a friend like that too. It's best to keep your distance because you don't want her to bring you down!!

glad you had some fun, even if you had to have that unfortunate revelation that your friend is no longer the girl you liked. I'm sorry, it happen though sadly.

Ooo what is this next big life change? best of luck!

Some people are just not appreciative. Give to those that give back and appreciate you!

For now I'm verrrrry very single. Very single. With what I went through with my ex - him bashing me behind my back, lies, cheating - I am so happy to be alone and looking towards a happy future.

R.I. Sounds like so much fun, I'd love to be able to hop states like that. It takes foreverrrr to get out of Texas!

Ummm...first, she is not your friend. You could have known each other when you were infants, and it would make no difference. That girl is so not a friend. As they say, "Who needs enemies when you've got friends like that?" Definitely an unhealthy relationship, Mel - cut her off.

I know that you'll make the best decision for yourself in your career. Sometimes you have to take an opportunity that presents itself, even if it seems risky, in order to further your career. Good luck, my love!! :)

By the way, ah, I love you for using lyrics from "The Way" as your title - that song will forever be one of my favorites!!! :)

I'm going to Providence, RI this weekend with my Parents to see the Water Fire. I have never been to Newport but I really want to go, the mansions seems so cool! Sorry about your friend, she sounds like a selfish bitch and you should just stay away from her. Good luck with your big decision Mel!! Can't wait to hear all about it.

Ahh! I just had oysters for the first time a few weeks ago! LOVE!

Oysters? Lucky! Grrrrr!!! I hope you become re-energized on your vaca! I so know drama and what it does to one's body and mind oh too well! Have a damn good time you! TAKE MORE PICS!!!!!

what a fun trip, i'm glad you had such a good time! and i'm even more glad that your happy about being home. doesn't it suck when you get back and wish you didn't leave? it makes home a little less special i'd say ...

Glad you had a nice time, despite the bitchy friend!!! Newport is gorgeous- I love it there :)

No time for friends like that! Your wish will come true. Best of luck with your decision. I'm sure you'll make the right choice.

There is no place like home...so true:) Ohh sweetie I am glad that you had some good times during the weekend:) Kisses darling and have a wonderful day:)

What Would a Nerd Wear said...

sorry your weekend didn't turn out exactly as planned :( but your pictures are pretty and so is your striped top!

Ack, sorry to hear about your friend. It's sad sometimes when you realize who a person truly is.

But, I'm curious about your decision. Do keep us informed! xoxo

uhmm this girl sounds.. lovely? Zombie attacks of all things.. eek.
If it makes you feel better.. you dont look your age! <3 hope thats taken as a compliment! x

love the pictures, thanks so much for sharing! :) I am glad you had fun but are now back home :)

sorry your friend was so rude :(

Good luck with your decision!!