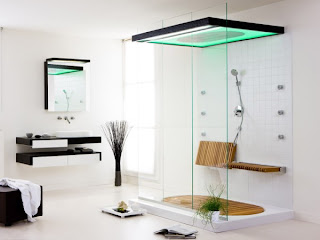 I wish this was my bathroom...
A lil while back the alarm went off one Wednesday morning and I scrambled to get my phone to shut it off. The blurry clock on the TV cable box read 6:59am and the phone said 7am. My mom called like she did every morning to wake her only up, a habit she’s had since I was in college. (I rely on her so much for that phone call <3) Cj’s legs started to squirm under the covers and I heard his yawn of awake. I know I heard his rooster alarm earlier but it was 7am when we both woke up. Here’s the problem: We both have to be out the door by 8am.
Usually Cj will wake up to his chickens or rooster alarm or I will and nudge him as softly as I can to wake up. He’ll take a shower first and I’ll start the Keurig and then while he’s dressing I’ll get up and start to get ready. He’ll leave and glance at “Angel” the Tv show on the screen and shake his head because he can’t fathom how I can watch it over and over again. I’ve recently switched to watching “Boys Meets World” in the mornings. We’ll then do the stereotypical kiss goodbye and I’m thankful that it’s not 1955 where I’d be left in the house all day to putter about without a twitching witch nose like Bewitched. However this present morning, we were late…really late.
I thought we’d both have more than enough time but alas it was 7:40 and CJ was still shaving. I hadn’t even taken my makeup off yet from the day before. Cj like a considerate boyfriend was like, “Babe you should just jump in the shower while I finish.” I really don’t know why I hesitated. It’s not like he hasn’t seen me naked before duhh we’ve dated for over a year now but I said I’ll wait. My subconscious drove my answers because all it saw was my shower curtain…WITHOUT A LINER!!! He could see all my wobbly bits as Bridget Jones so deftly puts it and I freaked out. He eventually finished and I popped in the shower quickly and started regretting my decision to not shower with him in the room. That was the moment where I realized I’m insecure with my body and vowed to try and fix that.
I know he loves me, even if I’ve gained about 10 pounds since our relationship began, but I’m apparently body conscious around him. That has to go if our relationship is going to work. So I’ve decided to make a pledge to LOSE THAT LAST 10 POUNDS not for him but FOR ME, so I feel more comfortable in my own skin and more secure. If I’m going to spend the rest of my life with someone, anyone, I need to be able to shed the clothes and step into a shower with them in the room. If Cj and I do move in together, I’m pretty sure this 7am wake-up will happen often. Perhaps I’m scared of rejection still…Perhaps I was looking for a deeper motivation then just fitting back into my clothes better…or the damage of the past to my self-esteem is rushing forward in my stress and tiredness. Not sure…but acknowledging the pledge is the first step. Stay tuned for the progress….
Have you ever had  a “No Showerliner” type incident in your relationship where you realized you were still shy around your significant other? What did you do to overcome it?
Posted by Melanie's Randomness at 11:02 AM

There are still times when I feel shy to undress in front of my hubby, and he doesn´t really understand why, but i guess it´s normal. you take time to completely get used to it.

HAHA yes!! I think everyone has, don't worry :) I'm working on improving too!

I still get very shy around Joe, but I think that's because for months at a time we don't see each other. So we have to regain that level of normality when it comes to dressing and showing in front of each other. I guess in a way it keeps us from being too settled and still acting young around each other.

Regardless of that I still would like to get my figure back to how it was at University and go back down a dress size. Here's hoping!

If we both had to be out the door by a certain time, it would be madness. I would purposefully wake up an hour before him just so we wouldn't fight over the bathroom.

And now that I'm close to 40lbs heavier and carrying his baby, it's even worse.

Probably b/c 30 of those 40lbs are sitting in my thighs. EEEK!

Ha! I feel that way all the time! And my husband truly notices nothing when it comes to wobbly bits. Nothing. Zip. And, still, after seven years I hesitate.

I have never had this experience myself. I think you just need to realize that CJ loves you as you are - wobbly bits and all! :)

Although I definitely do not have the perfect body I've never minded being naked around a serious significant other. My husband and I have showered together or done the whole "I'll shower while you finish getting ready" deal. It's just something you get used to.

He loves you for you, whether or not you have the "perfect" body. And honestly, you're beautiful and you know he sees that.

Sometimes my guy likes to light candles at night...sometimes I think...can't we just stay in the dark but then I remember...some people think this is romantic =)

I totally know what you mean. Over the years that my husband and I have been together, I've gained about 10 or so pounds - I blame it entirely on being married and having kids! There are certainly moments that I'd rather not be undressed and 'moving' - be it in the shower or to walk across the room - in front of him. Maybe it's silly, but I definitely feel a little self-consious about it.

I've been married for 17 years and I still get a little uncomfortable being naked around my husband. I think it's normal, but it is important to feel good about your own body. I think you've set a great goal for yourself!

goodluck on your weightloss journey, and good for you for deciding to do it for yourself and no one else. i'm married and hell i'm self-concious in front of my husband, friends, everyone!

i'm hosting a giveaway on my blog for some fashion illustration cards, hope you'll check it out!

this made me laugh because i had the same issue with my fiance around 2 years ago! he wanted to shower with me sooo badly and i was in no way, no how going to do that. he would see even more of me and i just wasnt having that. i am soo self concious (like really badly and have also gained 10-15 lbs while being with him..damn boys!) and when i told my friends about this issue they thought i was an idiot. they said "just do it, who cares! he wont notice any supposed flaws you have, all he wants is to be naked with you!". So i finally did it and realized it was no big deal at all. We've lived together for about 2 years now and i am sooo comfortable with him now, it's shocking. i always thought i'd be the girl who hid herself and who always kept her makeup on but i am FAR from that now! it feels so good! good luck!!

oh, and i found you through Mormon in Manhattan, just so you know!

Libby on the Label

I wish I could remember, because I'm sure I did... but it's been 10 years since we were a new couple.

I wish you good luck losing those 10 pounds. It will make all the difference in the world.
I think the shower curtain shadow just looks weird and makes our bodies a funny shape. So I can understand that part.
My ex would not take off his shirt around me.... ever! in over 3 years I seen him without his shirt off once.

Some times everyone just feels self conscious or needs privacy even if you have been married for 19 years like me! xo

I'm sure the worst thing that happens when you job in the shower while he is getting ready is he starts thinking, "Damn I wish I could get back into he shower with HER!"

I know that I have done this before...But nowadays, I'm just like, WHATEVER, if he can't handle it, he can't handle me. lol. It's more my boyfriend that is concerned with that now...and I tell him, "I don't care if you've gained weight. We're getting older, we're busy and lazy when we actually get home." But...I told him, if it bothers him, I don't mind if he wants to spend money on the gym. Everyone wants to feel good about themselves.